April 24, 2017: We’ve scoured the Web to find the best and most compelling animal stories, videos and photos. And it’s all right here. 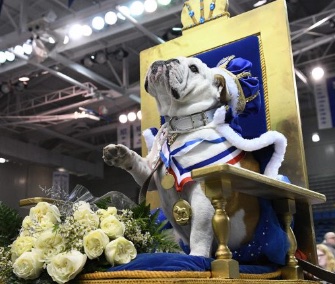 A 2-1/2-year-old Bulldog named Prudence waltzed into Drake University’s 38th Annual Beautiful Bulldog Contest sporting a sparkling blue tutu on Sunday. But it was the engaging looking in her eyes that won the hearts of the judges at the Iowa university. “Her full name is Prudence Grace With The Precious Face, because when she looks at you with her big brown eyes, you just can’t resist her,” said her owners, Angela and Tom Miller of Des Moines. The energetic but sweet Bulldog had a large cheering section at the contest. Her owners say she loves cuddling in her chair, watching basketball — and eating cookies. And she looked quite comfortable seated in her throne with a crown on her head. “She’s spunky and beautiful with a fun personality, and you can tell she has a great relationship with her owners,” said judge Sandy Hatfield Clubb, Drake’s director of athletics. — Read it from Drake University

Officials with Abu Dhabi’s civil defense department closed four lanes of a busy stretch of highway to rescue a kitten who’d wandered across the road and was huddled by a median. The team stopped their trucks on the highway and ran out to find the tiny black kitten. A video shows one member slowly approaching and scooping the little one up before it could run away again. The workers then quickly got the kitten into one of the trucks and off to safety. A press release said the department “always deals with such incidents seriously by upholding the humanitarian and animal welfare principles.” — Watch it at Autoblog

A vast tundra in Norway’s mountainous Lapland region is experiencing high temperatures that are threatening the way of life of the indigenous Sami people who herd reindeer. “We already feel the effects of global warming here,” said Per Gaup, a reindeer herder in his 60s. “I can see that we’re losing more reindeer because of climate change.” The climate change affects grazing conditions for the 146,000 reindeer who feed on lichen and moss under the snow. The herders say the reindeer can’t get to the moss because the snow has been thawing and re-freezing, creating thick layers of ice that they can’t break through to eat. — Read it at Seeker

Thousands of people joined in the March for Science in cities around the country on Saturday, but the cutest participants may have been at the Monterey Bay Aquarium in California. There, endangered African penguins marched through the facility in the March of the Penguins for Science while onlookers held signs supporting them that read, “Science Gives Us Happy Feet” and “Climate Science is Black and White.” The march was streamed live on Facebook and went viral afterward. It’s been viewed more than 2 million times. — Watch it at The Hill

When he suffered life-threatening complications from the flu, Shane Godfrey had to spend five weeks in the hospital, and lost about 50 pounds. So, his dog, who may have feared he’d lost his owner forever, didn’t even recognize him when the two were finally reunited. Willie stayed with Godfrey’s sister while he was hospitalized. In a video of their reunion, Willie clearly doesn’t know who Godfrey is and even barks at him — until he gets close enough to smell him. In an instant, Willie remembers that smell and turns wild with wiggling, tail-wagging excitement. — Watch it at The Dodo
Source: Pet News